A Monster…on Top of this Cake?

Ever read the book The Monster at the End of This Book? It’s a Sesame Street book, and—I’m about to ruin it for those who haven’t read it—in the end Grover is the monster.

It was one of my kids’ favorite books, mostly I think, because my husband did the voices when he read it, which also might explain why the kids always wanted him to read it to them. My Grover imitation was sadly lacking.

Over time, the book was pushed to the end of the shelf, in favor of newer titles the kids could read themselves. But Grover had a way of staying with us…

Do you see him? On the birthday cake, among the candles and flags? 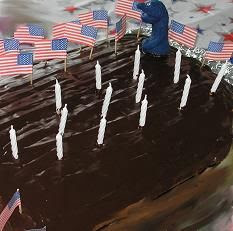 Whenever there’s a birthday in the family, the little plastic finger puppet Grover, circa 1973, *magically* appears on the cake. (This is the most recent Grover sighting, my son’s 4th of July birthday, which explains the flags…)

I’m not sure how this started, or better yet, why, but Grover gets around. I think he might be becoming a chocoholic, since inevitably it’s a Boston Cream Pie that he’s stuck upon.

(The picture, by the way, is of one of my homemade Boston Cream Pies, which is really a cake—does that make sense to anyone? Once I learned the art of tempering [no one liked the scrambled eggs in the custard], it has become a family favorite and the most requested birthday cake.)

We’re never quite sure where Grover will turn up. Once he appeared on a cake I made to celebrate my daughter learning how to ride a bike. Yellow cake, chocolate frosting, little bicycle on top. And Grover. He also showed up on several first communion cakes. Nothing like a “God Bless”, a cross, and…Grover?

In the future, Grover will probably pop up on graduation cakes, wedding cakes, and hopefully the birthday cakes of many grandchildren, who will undoubtedly also have their grandfather reading The Monster at the End of This Book to them…

Anyone else care to share their wacky family traditions?