No One Heard Her Scream by Jordan Dane

Every once in a while I like to read a good thriller. This book would fall into that category (also romantic suspense). It was a little scary, a little gory at times, and played on some of women's worst fears. It was also a page turner and features a great protagonist. So if you're in the mood for something a little darker, you might want to check it out.

Burdened by Grief, She Hunts a Killer 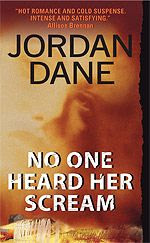 They never found her sister's body, but Detective Rebecca Montgomery knows her murderer is still out there. In the five months since Danielle went missing, there have been two more brutal abductions. A savage menace stalks the women of San Antonio, and the relentless detective will do anything to find him.

And a Seductive Stranger Shadows Her Every Move

But her latest case—the discovery of a young woman's remains inside the wall of a burned-down theater—plunges Rebecca from her grief into a brand-new nightmare. She soon meets handsome, mysterious Diego Galvan at the crime scene, and his shadowy connections will lead to her first break in both cases. But when Rebecca submits to his considerable powers of seduction, she will leave herself vulnerable to a merciless killer . . . and when he attacks, no one will hear her scream.
Posted by Heather Webber at 8:12 AM