I had the kids (teenagers) in the car this morning on the way to school and for some reason the topic of discussion switched to the previews for next week's Amazing Race. The clip showed one of the contestants hopelessly lost in what looks like a castle, because he doesn't know a word on the clue: Candelabra. He's seen wandering around asking people if they are "Candle-A-Bra" and mumbling, "I don't know what a Candel-A-Bra is."

Now, as this is a contestant I happen to like, I hope he figures it out before he gets the whole "You've been eliminated from the race" from Phil.

As I drove toward the high school the conversation went something like this. I'm paraphrasing. It was too early to think coherently.

Me: I think he's thinking candelabra is a name, like Barbara. That's why he's asking all the women around if they're "Candel-A-Bra." I would think that even if you didn't know what a candelabra was, that the candle part might jump out since you're in a dark castle, though the spelling could easily throw someone off.

Them: Murmurs of agreement (it was early!)

Me (I was chatty this morning): Though, now that I think about it, you two might not know what a candelabra is either. It's not a common term, but the whole candle part of the word when you say it aloud...hopefully you'd put it together

Them: We know what a candelabra is.

Son (with a hellllooo? look on his face): Beauty and the Beast. The dancing candle guy? 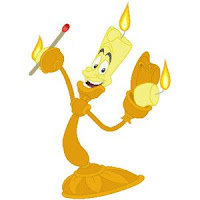 Me: This is going in a blog.

Too funny! Who knew Disney was increasing my children's vocabulary all those times I plopped them in front of a video so I could steal some writing time?

If only that contestant on Amazing Race had seen Lumiere singing "Be Our Guest"... I'll be tuning in Sunday night for sure, and I think it might be time to watch Beauty and the Beast again. It is one of my favorites--and I might learn something while I'm at it.
Posted by Heather Webber at 7:18 AM