Smile of the Day

Son # 2 is coming down with something. It's mostly sinus stuff right now, and I'm hoping it won't morph into something worse (I hear there's some sort of stomach bug going around). Well, he's stubborn and hates to miss school. He missed one day last year, one day the year before. This year his attendance is perfect -- not even a tardy. So he'd pretty much have to be bedridden not to go to school. 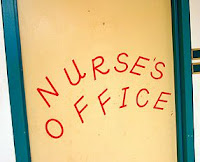 Me, on the other hand, almost had to make up days my sophomore year because I was absent so much. And my senior year? At least fifteen days absent... Obviously, son # 2 doesn't get that stubbornness from me. Actually, I know exactly where he gets it from: my husband. I don't think he missed more than a handful of days during high school and has taken NO sick days EVER from work. Ev-er. Heck, I work from home and take sick days.
But I digress...

So, anyway, this morning as I'm dropping son # 2 off at school, I told him that if he gets worse, he needs to go to the nurse's office and I'll come pick him up. He looked at me, his blue-green-gold eyes slightly confused and said, "Where's the nurse's office?"

I had to smile. He's been in that school for years.

He's been lucky. And stubborn. He can thank his dad.
Posted by Heather Webber at 7:43 AM