Lately, there's been a lot of woo-woo going on in my family. Not sure why, but it's getting freaky, so I kinda wish it would stop.

Instance #1: About a week or so ago Mr. W and I had to divide parenting duties. I went to Florida to visit son #1 and my parents (I flew), and he went to Boone, North Carolina, to see son #2's college race (Mr. W drove). Boone isn't too easy to get to from the Cincinnati area. A seven hour drive, most of that along two-lane mountain highways. Even though it's good-sized town and a bit of a tourist area (though I'd never heard of it), it's most definitely in the middle of nowhere.

Fast forward to my flight, which is the day Mr. W left Boone. I'm on board the second leg of my trip (DC to West Palm Beach) and found myself reading the US Airways magazine. There, among the articles about the Caribbean, destination weddings, luggage, etc., is a huge spread on...Boone, NC--including a paragraph on the hike that Mr. W took. Very woo-woo. 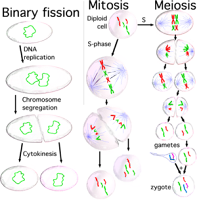 Instant #2 involves Baby Girl and Son #2. Son #2 is a pre-nursing major who's trying to get into the BSN nursing program at his college. His biggest challenge is his anatomy lab class--it's just plain hard memorizing all those bones, etc. Anyhow, his first big test was this past Wednesday, around noontime. Afterward, he texted me that he thought it went well but he got a little confused with the phases of mitosis (I have *no* idea what that means.)

Fast forward to that night at dinner. I was telling Mr. W and Baby Girl what son # 2 has said, and she looked up and said, "That's strange--I was thinking about mitosis today." She explained that she had been doodling in her school planner around noontime (woo-woo!) and when she saw what she had drawn thought it looked like a mitosis phase (and yes, she's that smart that she would liken a drawing to mitosis). Mr. W asked her when the last time was that she had learned about mitosis... That would be two years ago, freshman biology. So, at the same time son #2 is stressing about mitosis, Baby Girl is randomly drawing mitosis (mitoses?). Coincidence? I think not. So woo-woo.

Strange things are happening around here... Any woo-woo in your life lately?
Posted by Heather Blake Webber at 6:04 AM