The "Do They Know You At All?"

That's what Baby Girl said to me last night as I flipped through a yoga catalog that was mailed to me.

By "they" she meant the yoga company.

And by "know you" she meant because I'm a sloth. She knows me well.

The catalog was something, let me tell you. The clothes were great (I'd lounge around in them in a hot second), but the poses those women were in. Ow, ow, and more ows. Look at this. Just look at it. 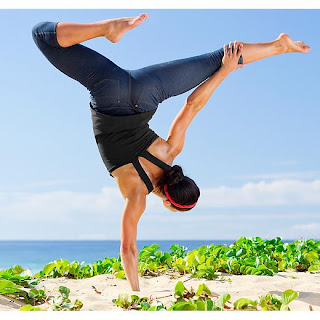 Doesn't it hurt to look at it? It hurts me. Thankfully, there were other poses in the catalog. Trendily-dressed, yoga-type women standing next to bicycles... Poses like that give me hope. I could totally do that! The pose above? No way on earth. But let me tell you, I'm mightily impressed with anyone who can even come close.

For now, I'm keeping the catalog. The company might not know what I sloth I am, but even sloths like to look cute when they sloth around...
Posted by Heather Blake Webber at 6:31 AM