I’ve been reading and seeing a lot about random acts of kindness lately. People in the drive-thru who pay for the order of the car behind them, anonymous donations—that sort of thing.

And though I always try to be kind, being randomly kind is well, more random. A spur of the moment kind of thing—not something I plan for, really, but decide on the spot.

I also love being on the receiving end of random acts of kindness. It restores my faith in humanity, which after watching the evening news, is often lacking. I’m often cynical about people and their motives, so it’s a nice bop on my head when a stranger does something nice for me.

Happily, I was on the receiving end of a random act of kindness while I was in D.C. I’d just landed and was going to take the subway to the hotel. When I entered the Metro station, I approached a fare machine and stared at it, trying to decipher how to actually buy a fare card (not as easy as it might seem).

As I was standing there, a husband and wife approached me and asked if I needed a fare card. I nodded, and the man handed me a fare ticket. He and his wife had bought weeklong passes and didn’t need them anymore since they were flying out—there was still two days left of fare on it. His wife handed her ticket to a woman next to me. A simple act, but one I really appreciated.

And while I was in D.C, I called home to check on my family, and my daughter told me a story about something that had happened to her at school that day. She’s been working on a painting of one of son # 2’s track shoes (a bright green track shoe that has holes for spikes). The day before she’d left her painting in the hallway on a rack to dry, and as she approached her classroom that day, she noticed something on top of her picture.

At first, she thought it was litter and was irritated, but as she got closer, she realized it wasn’t trash—it was treasure.

Someone left this note on her painting: 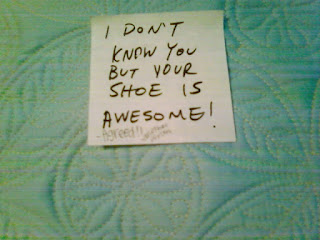 Notice that someone added to it? (It's hard to see but the bottom part says "Agreed!! -another person")

And then someone else left this:

My daughter was over the moon. Over. The. Moon. The fact that these notes were probably left by teenagers makes me ridiculously happy—random acts aren’t just for an older population. And I cracked up about the BilboBaggins, too. Gotta love teenagers (bad grammar and all).

It's time for Baby Girl and me to pay these acts forward, because you just never know when a fare ticket -- or a note of praise -- can make someone’s day so much brighter.