-Flew with friend Shelley and my oldest son to St. Louis, to L.A., and finally to Santa Barbara. No problems with any of the flights, no lost luggage. Whew.

-Spent the night with relatives, who made me stay up obscenely late so I’d adjust to the time change. 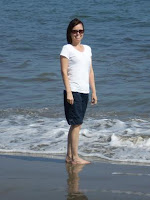 - Took the day tour of SB, including the beach (my first time in the Pacific), the courthouse tower, and the exclusive Bacara resort.

- Saw more relatives, watched some Red Sox, had an adventure with a bus, a wheelchair, and American Chop Suey. 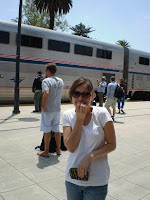 -Left son with relatives, met up with Shelley, and took the Coast Starlight from the SB train depot, my first time on a train. Train was late due to earthquake in L.A.

-After nine hours on the train (fun! No, really, it was!), arrived in Oakland, where good day turned bad. Luggage checked wrong, a bus driver out to make extra money, and a language barrier made the trip into San Francisco…interesting. Finally made it to the hotel (at 11:30), checked in and met up with other roommate, Karen MacInerney.

-Went to the tea given by BookEnds Literary Agency. Was able to catch up with buddy Kris Fletcher, eat some lovely sandwiches, and drink a vanilla flavored tea. Much fun.

-Attended RWA’s literacy signing. Had my picture taken by a Publisher’s Weekly blogger.

-Got to finally meet the beautiful, talented Jane Porter. If you haven’t read one of her books, run not walk to your local bookstore.

-Walked to Chinatown with Hilda and bought loads of kitsch, including a “prosperity Buddha” for my desk.

-Fought migraine most of the afternoon.

-Went to dinner with Karen and Hilda, where Karen found a cockroach in her salad. Abandoned dinner, but found a dessert place where I snagged a piece of cheesecake to bring back to the hotel. K, H, and I watched Made to Order and went to bed early.

-Missed a breakfast date with the Series board, thanks to a migraine (sorry, guys!). 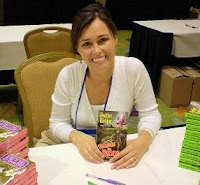 -Sucked down some Excedrin, and Shelley and I signed books at the Avon open house. Avon gave away about 100 of my books. Hopefully some new readers will enjoy the series!

-Shelley and I glammed it up for the Avon family dinner. Met the lovely Nancy Robards Thompson. I was known as “Cathy Webber” for most of the night because of a name tag snafu. Had a great time.

-Shelley and I ended up dancing and singing at the Harlequin Ball till nearly 12:30 in the morning with Nancy and her roomies. Much, much fun. Bumped into the fabulous Tracy Montoya at the ball and through alternately yelling into each other’s ears we were able to catch up a little!

-Need I mention the headache? 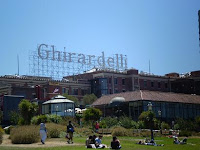 -Had an afternoon to kill, so I went off to find the piers. As I walked through Chinatown I found $16 on the ground (that Buddha’s already working!)

-Took taxi home, blowing most of the money I found.

-Met up with fellow Deadly Diva, Denise Swanson, for an excursion to St. Patrick’s Church. We then caught up over dinner at the hotel.

-After a few mindless episodes of Wipeout, said goodbye to Hilda (who was taking the red eye) and went to bed early.

-Woke up obscenely early to catch a flight out of Oakland.

-Shelley and I got a shakedown from the car service affiliated with said fancy hotel.

-Bought People and Us Weekly to get me through my first flight, though I had about four paperbacks in my carry-on.

-Was peeped on by an overachieving bathroom attendant changing toilet paper in the Houston airport. That was interesting, to say the least.

-Read Boneyard the rest of the way home. Nothing like creepy serial killers to get you through a flight.

-Was so very happy to see my family at the airport. :)


This week has been all about catching up with life and writing… And I truly understand that whole “No place like home” saying!