Running Into (over?) The Famous

Okay, so there we were in Bar Harbor, Maine. We were cruising the main road, searching for a parking spot... If you haven't been there, picture a small coastal town with a town center crammed with blocks of shops. Parking was hard to find.

Suddenly a middle-aged man and woman stepped in front of the car, jaywalking. The man actually stopped to give us the stink eye and stare at our license plate (New Jersey--a rental) and the woman continued walking.

And I thought, hmmm. The man looks familiar. At first I thought it was Stephen King, but no, not right. Then I looked more closely at the woman. And under the hood she wore, I recognized the hair. Susan Sarandon. And the man was Tim Robbins!

My husband almost ran over Tim Robbins and Susan Sarandon (okay, so it wasn't that close, but it sounds better).

Later, as we were walking around town, I spotted a marquee of a movie theater--Bull Durham was playing. It couldn't be a coincidence, right? So we went and checked it out. Lo and behold, it was a special showing of Bull Durham with special appearances by Susan Sarandon and Tim Robbins. Dozens of people were standing in line, waiting for the show. And we couldn't help but wonder how upset they would have been if Susan and Tim hadn't been able to make the show...

I have to admit it's the closest I've come to actors of any kind, and it's a fun story to tell, but really, they should use a crosswalk. 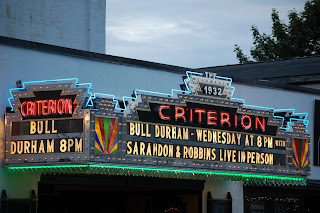 Posted by Heather Webber at 5:54 AM