The Games We Play

So there I was on my writing retreat last month. I'd unpacked, written, had dinner, and finally, it was time for bed. I'd brought my own pillow (a travel trick I swear by for a good night's sleep), and cuddled up, only to feel a hard lump in my pillow case.

As it wasn't squishy or wiggly, I didn't fear a mouse or some other critter had worked its way in there, so with more courage than I thought I possessed, I reached in and pulled out... 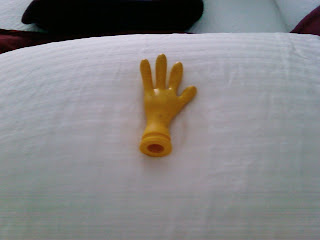 Bert's hand.
Bert, as in Ernie and Bert, the persnickety yet loveable puppet from Sesame Street. Bert has been in the family since my husband was a little boy and somewhere during our kids' time with him, he lost a hand. We never could figure out how to reattach that hand, so we did the next best thing. My husband and I started hiding it on each other. I've found that hand in some strange places, but before the retreat it had been YEARS since I'd seen it, and had to laugh at my husband's comic timing. It was a nice reminder that he was thinking of me while I was gone, but, oh, it was ON.

Once I returned home, I waited a day or two and hid Bert's hand in my husband's running shoe. Oh, how I giggled just thinking about him putting his foot in there only to find Bert. Later, he did confess that Bert had scared him a bit--his shoes were on the garage floor and he'd thought something had crawled in there.
Well, that was weeks ago, and I haven't seen Bert's hand since, which means that its out there somewhere, just waiting...


I'd like to say this kind of strange family game is unique to Bert's hand, but it's not. Years ago when we finished the basement, we took off the wooden knobs on the bi-fold doors and put on nicer ones. Those knobs are still being hidden between my husband and daughter.
Then there's Yoda. 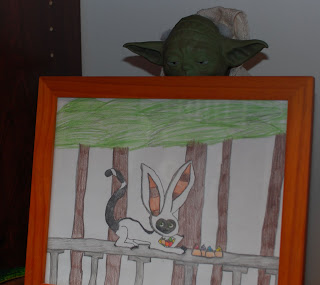 My gosh. Yoda has scared the bejeebers out of me more times than I can count. It's my husband and son # 2 who hide this guy from each other. He's been tucked into our bed, hidden on the bathroom shelf--even on the towel bar in the bathtub. Let me tell you, seeing Yoda peering at you while you shower is CREEPY. More recently, he scared me in the closet (see pic--isn't he creepy?). Currently, he's hiding behind my son's movie rack (son hasn't spotted him yet but I have).
I'm thinking as far as family games go, these little hide-and-seek games are fun.  But now that I'm thinking of it, I kind of wonder where the rest of Bert is...

Does your family play any wacky games?

PS: You can see some pics of the retreat on my FB page--you don't need an account to view the page.
Posted by Heather Webber at 8:03 AM