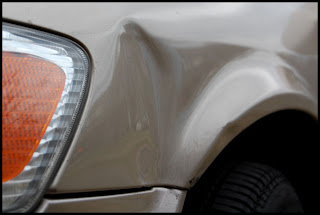 Yesterday my car went into the shop to get the dent fixed, which will take four days (????), and so I'm now zipping around town in a peppy little Corolla, a rental covered by our insurance. The rental company met me at the auto body shop with the car (love that), I signed some papers, inspected the car and hopped in to head home.
That's when the smell hit me.


The car, a 2010 model with 650 miles (650!!!!) reeked of cigarette smoke. Someone obviously ignored the no smoking stickers all over the car (we're suspecting the rental employee). I have a strong sense of smell and unfortunately, cigarette smoke just doesn't agree with me. After about an hour, my stomach gets upset, the headache starts... Not fun. Not wanting to make a huge fuss--and it would have been huge--I decided to try and air the car out on my own.

I started with a unwrapped cinnamon tart in a plastic baggie (the candle kind of tart--not a real one). The warmth of the car releases the scent. After an hour, I had cinnamon tinged cigarette scent. Then I Febrezed the heck out of the car. So-so. Then I Febrezed again and left the windows down all night.
Success! There's still a hint of cigarette smoke in the car, but barely noticeable. Luckily the temps have been wonderful, and I've been driving with the windows down a lot.
Is there a scent you just can't stand?
Posted by Heather Webber at 7:53 AM