Are you a grammar stickler? Have grammatical pet peeves? I'm not the biggest stickler around (those who live in glass houses...), but it's true that years and years ago, I used to write a column in my local RWA chapter's newsletter about commonly misused words. The kind of words that make grammar sticklers pause, frown, groan. Words like trooper when you mean trouper. Father/further. Then/than. That sort of thing. The misuse that drives my daughter crazy: breath/breathe.

As I age I'm not as picky. People make mistakes. The most common ones: your/you're, whose/who's, they're/there/their. However, misplaced apostrophes drive me nuts. At a hotel in Pittsburgh, there was a sign that announced on Wednesdays they served "Omelet's and Turkey Sausage." I wanted to take white-out to it. 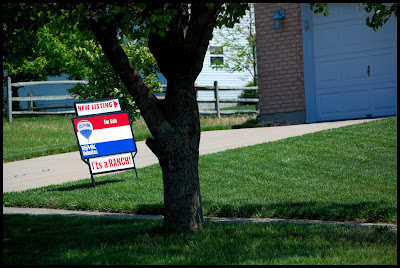 And look at this For Sale sign. There is No Way I could leave that sign as-is if that was my house! I'd be at home depot buying some white and red paint. :)

Update: Of course eagle-eyed Theo would catch that I put father and not farther/further. Darn it. See what I mean about glass houses? LOL.
Posted by Heather Webber at 7:20 AM