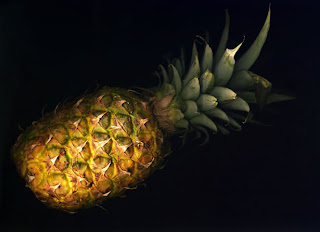 I cut my first fresh pineapple last week. I'd always bought pineapple pre-cut and cored from the grocery store, but last week I ventured into new territory. Okay, I admit it, I was forced into new territory--Kroger was out of the ready-to-eat pineapple.
And I really wanted fresh pineapple. It's one of my favorite summer fruits. But cutting one myself? Coring it? Have you seen those spiky green fronds, the prickly eyes? Uh, yeah.  If canned pineapple measured up in the least, I'd have been stocking up.
But it doesn't, so I sucked it up and bought my first whole pineapple. And okay, I admit it, I had to look up how to cut it online. Don't judge me.
Color me shocked, but cutting it was really easy. Coring was a bit trickier as I don't own a corer, but I improvised. The end result was definitely worth it.
Will I buy another? Maybe. Someday. When I have to. But this week? Okay, I admit, I bought the newly restocked  ready-to-eat pineapple...
Do you have a favorite summer fruit?
Posted by Heather Webber at 6:10 AM