I'm in the process of cleaning the oven. It's a fairly easy process. Take out the racks, push a button, and voila, two hours later it's nice and clean.

Although it's an easy process, it's not painless. First there's the smell. The manual for the stove actually warns that the fumes can be dangerous for small birds and that they should be moved to a well-ventilated room. Not sure how this translates to humans, but if I had a baby in the house, I would not be using the self-cleaning oven. 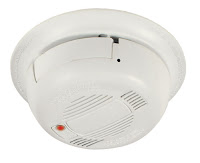 Then there's all the noise. The oven fan, the ceiling fan...the smoke alarm. The kitchen's smoke alarm is a cranky-puss when it comes to the self-cleaning oven. It screams. Shrieks. It makes me want to run away.  So I do what any reasonably sane person would do. I unplugged the smoke detector (it's hooked into the electrical system) from the ceiling.

Until the first second I turned my back on it. More shrieking.

For a second I thought it was possessed. Then I remembered the back up battery. I couldn't take that sucker out fast enough.

Ah, blessed silence. Well, except for the fans.

And now I'm thinking about moving to a well-ventilated area of the house...

~Heather
Posted by Heather Webber at 8:05 AM