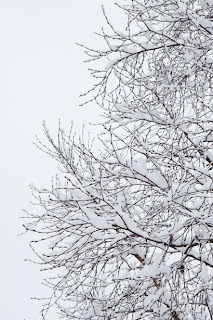 It's official. The kids have the first snow day of the year today. For a while there it was in question-the school district issued a two hour delay last night. Is there anything worse for a kid as they head off to bed, visions of no school in their heads? Two hours is just a pain for everyone involved.

While other school districts canceled school left and right--neighboring districts--ours held firm. Two hours. We whined. We moaned. We wondered why, with four inches of snow (we know this isn't a lot, but it's a lot for Cincinnati) school wasn't canceled. Then this morning I learned that Ohio changed its calamity day rules from allowing five days to only allowing three. After that, the school year extends. I can see now why the district was being so stingy. And I have to think my kids would take the two hour day over a full day in June!

So today, we're going to enjoy the free day. It's actually too cold to play outside, so we'll be in drinking cocoa and enjoying some family time. Let it snow!

~Heather
Posted by Heather Webber at 7:31 AM