Hmmph. Have to admit that my love of reality TV has lost a little of its shine lately.

First, there was the whole Top Model debacle. What was up with that? Never mind the whole Angelea ordeal, but to choose Lisa over Allison? I don't think so. 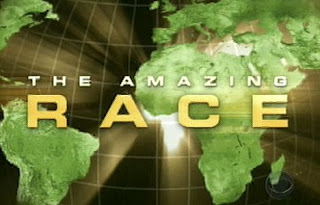 Then, my all-time fave show, The Amazing Race, left me feeling disappointed. I suppose Ernie and Cindy deserved to win (it hurts to say that since I wasn't a big fan of theirs--out of the final three, I really hoped Marcus and Amani would pull it out), but I thought the last challenges could have been a lot tougher. I mean, really, it's the finale! Make them work for it. I also think racers shouldn't be allowed to Google or use cell phones on the race. Seems like cheating somehow.

Then, my favorite chef on the Next Iron Chef was eliminated. Not happy.

THEN, last night on the Biggest Loser finale...so NOT HAPPY with that result. Though I have huge admiration for all the contestants (not sure I could do what they did), but was really hoping either Ramon or Antone would win.

So...overall, am kinda grumpy with my Reality TV watching.

I'm not predicting a break-up yet, but maybe a trial separation.

Okay, that's crazy talk. You know how addicted I am.

There's still Survivor (actually watching this season) and Top Chef to go... I'd really like this downward spiral to turn around. If not, I might actually have to think about that separation. Gasp.
Posted by Heather Blake Webber at 8:43 AM