Oooh! Look! It's my new cover for A Witch Before Dying (due out in August). Isn't it so pretty? My cover artist, Bella Pilar, does such an amazing job. 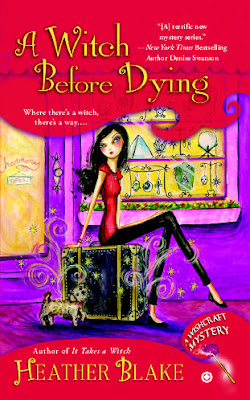 Every where you see swirls has glitter embossing, some of the baubles in the window are glittery, and Missy's collar and Darcy's necklace are also glitzy. So fun! Absolutely love this cover--couldn't be happier!

From the back cover:

When Darcy is hired by Elodie Keaton to clean up her missing mother’s disorderly home, the Wishcrafter is certainly up for the task. After all, the motto of her Aunt Ve’s personal concierge service As You Wish is “No Job Impossible.” But beneath the piles of old newspapers and knickknacks, Darcy discovers something much more disturbing: Patrice Keaton’s body.
Darcy’s determined to give Elodie peace of mind by investigating her mother’s disappearance and death. Patrice was last seen over a year ago after a fight with her Charmcrafter boyfriend. Was her murder a crime of passion? Or were Patrice’s troubles caused by the Anicula, a wish-granting amulet? Now Darcy has to find not only a killer but also the Anicula— before the power of ultimate wish fulfillment falls into the wrong hands…
Posted by Heather Blake Webber at 2:02 PM