So excited to let you know that there's a new Nina Quinn book available. THE ROOT OF ALL TROUBLE is the 7th book in the series. Right now it's out on Kindle, Nook, and Smashwords. Other e-formats and the print version coming soon! 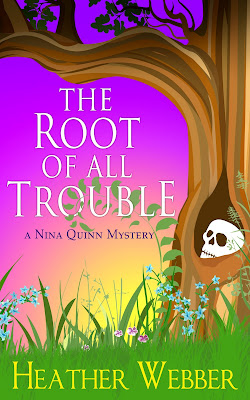 WHEN IT RAINS, IT POURS...When a spring storm rolls through Freedom, Ohio, landscape designer Nina Quinn expects to get her hands dirty with the mess left behind.But after high winds uproot a tree, revealing the corpse of a man inside its rotted hollow, Nina quickly realizes that cleaning up after Mother Nature’s fury is the least of her worries.It soon becomes clear that there is no lack of suspects in the man’s untimely death. As a shady contractor and philanderer, he’d angered a lot of people before he disappeared, including some of Nina’s closest friends.With the help of her police detective ex-husband, a mysterious coroner’s investigator, her formerly-felonious employees and her zany neighbors, Nina sets out to uncover a killer...before another victim ends up planted six feet under. Other titles in the Nina Quinn Mystery Series:A Hoe Lot of TroubleTrouble in SpadesDigging up TroubleTrouble in BloomWeeding out TroubleTrouble Under the Tree
Posted by Heather Blake Webber at 8:46 AM