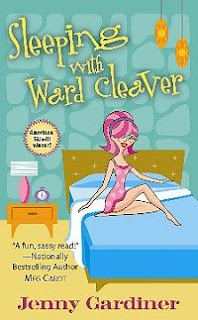 How's that for a title? I love it--and I know a ton of others did, too, as it won a title contest. And though the "Sleeping" part of the title might make you think this is a romance, it's definitely women's fiction. And anyone who's been married and has kids (or pets!) will identify with this book in one way or another. I couldn't put it down (which made for a long night).

WHAT HAPPENS AFTER THE "HAPPILY EVER AFTER"?

Sleeping with Ward Cleaver is the funny yet poignant story of a woman at a crossroads in life, who years earlier married a man who swept her off her feet, but now finds that her Mr. Right has evolved into Mr. Always Right, and the only sweeping going on in her life involves a broom and a dustpan. As her dreams collide with reality and the one that got away shows up trying to worm his way back into her heart, she must decide if her once charmed marriage is salvageable, and if so, how she's going to go about saving it.


The Back Cover Synopsis:

That about sums up the sex life of Claire Doolittle, not-so-happily-married to Jack--once the man of her dreams but now a modern-day version of the bossy, dull Ward Cleaver of '50s sitcom fame--Claire is at the end of her rope. Gone are the glorious days of flings in elevators and broom closets. And Jack? All he needs is a cardigan and a billowing pipe to become the domineering father figure Claire never wanted. And looking at her body in the mirror, Claire would cast herself as Lumpy. They'd once had a world of color, of wanton frivolity. Now, life's black and white: a sitcom in reruns. A not-very-funny sitcom. Cue an old boyfriend--the "one that got away"--throw in a predatory hottie who's set her sights on our leading man, and watch Claire's world spiral out of control. In the old TV show, the Beaver always got a happy ending. Stay tuned.
Posted by Heather Webber at 9:26 AM